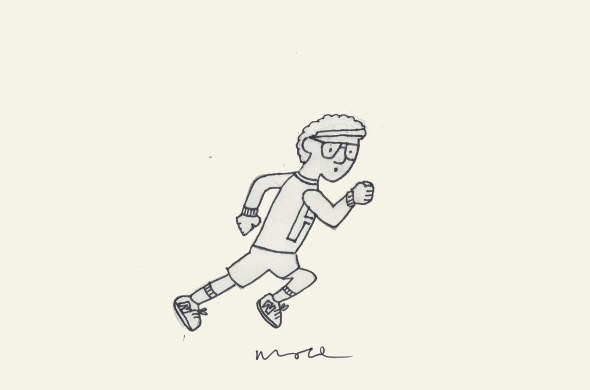 Erich was always a huge sports fan, and a passionate runner – he ran 40 marathons. He commentated on the Olympics in 1972 and 1976; he also made classic films for NBC on the history of the Olympic events. Erich wrote numerous articles, both academic and popular on running and the marathon.

“Never use the word marathon except for what it really means: a race through a city for 26 miles and 385 yards. Sprinters have the speed, weight men have the muscle, but marathon runners have the courage. It takes courage to face sheer agony for the last 30 minutes of this gruelling race. Milers never worry about whether they are going to finish a mile race, but a marathon runner, every time he gets out there, no matter who he is, worries about whether he is going to make it all the way. Twice already in Olympic history, a man has entered the stadium far in the lead of a marathon, and collapsed a few yards from the finish.
This is a very special kind of race. Don’t take my word for it – take the words of the great Emil Zatopek who said, ‘if you just wanna win something, run 100 meters; if you want an experience, run a marathon!”

A memory from John J Kelley

“Erich led such a crazy life, he was always on the go. He had an old Cadillac that he’d drive back and forth between Yale and Harvard. We lived on the way, and every once in a while, on a Sunday morning, we’d get a call: ‘Hey, anyone running today? I’ve been up for 32 hours straight, but I need to get in some distance.’

So we’d wait for Erich, and he’d join us. I remember one day in the mid 1960s, Ray Crothers was getting ready to run, but he was saying, ‘I really shouldn’t run. I’ve got a Western Civ test tomorrow, and I’m gonna fail it.’

Then Erich pulls up, and he hears Ray’s story, and he says to him: ‘Are you willing to run really slow today if it will help you pass that exam?’ Ray says, ‘Yes, sure.’

So he and Erich did an entire 20 miles together – I was out ahead of them – with Erich lecturing Ray the whole way. And sure enough Ray passed his test the next day.” “I would often come back from a run with the idea for a plot of a story or the words of a song, which would come to me as if the mind had been refreshed with more oxygen and inspiration lubricated by the perspiration of my efforts.”

“No day – no matter how stressful – ever ended on a sour note.”

“I also picked up some tips along the way, one of which is worth passing on. Every marathon runner has a favourite song to which he sings in his head to keep the cadence of his stride. My most effective tune was “Hello Dolly,” which underscored literally thousands of miles. Try it – it’ll take you a long way. That is all the wisdom I have to impart on this matter!”