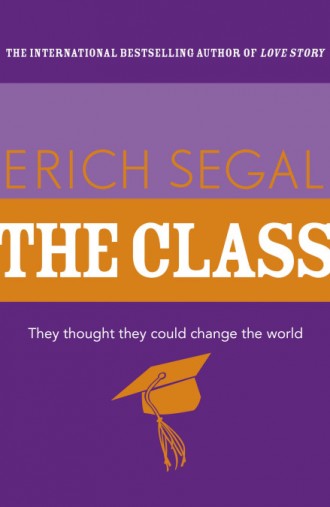 They were Harvard ’58, the class who thought they could change the world.

Danny, the musical prodigy, risks all for Harvard, even a break with his domineering father. Yet his real problems are too much fame too soon – and too many women.

Ted spends four years as an outsider. He is obsessed with climbing to the top of the academic ladder, whatever the cost.

Jason, the golden boy – handsome, charismatic, athletic – learns at Harvard that he cannot ignore his Jewish background. Only in tragedy will he find his true identity.

George, a Hungarian refugee, comes to Harvard with the barest knowledge of English. But with ruthless determination he masters not only the language but the power structure of his new country.

Andrew is haunted by three centuries of Harvard ancestors who cast giant shadows on his confidence.

It is not until their dramatic 25th reunion that the men must confront their classmates, and the value of their lives.

The Class in Erich Segal’s own words:

“This book is my life, it’s my experience from the time I was eighteen till the time I was forty-six. The Class is about the generation of people that entered college, not just Harvard where the book is set, but everybody that was eighteen in 1954 and was in his mid forties in 1983, when the 25th reunion occurs. You all come back to see what you have done with your lives and it took me twenty five years to see what I had done with mine, and to weigh myself in the balance. That is what the 600 pages are all about, you need 25 years to live first…”

Quotes from The Class

“Although champagne was served, the mood was curiously subdued. After this reunion, they would probably never meet together as a class again—at least not in such numbers. They would spend the next decades reading obituaries of the men who had started out in 1954 as rivals and today were leaving Harvard as brothers. This was the beginning of the end. They had met once more and just had time enough to learn that they liked one another. And to say goodbye.”

“They glanced at one another like tigers taking measure of a menacing new rival. But in this kind of jungle you could never be sure where the real danger lurked.”

“Quiet heroism or youthful idealism, or both? What do we know? That life without heroism and idealism is not worth living - or that either can be fatal?”

Reviews of The Class