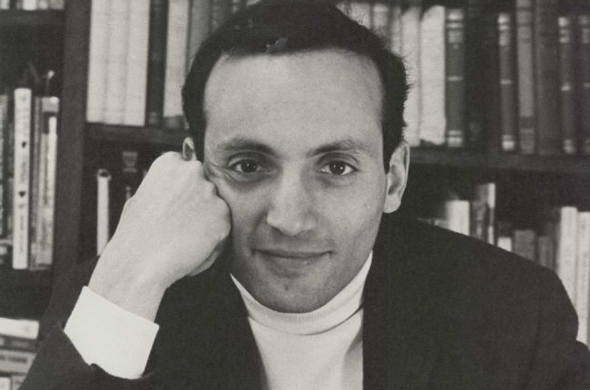 Erich Segal (June 16, 1937 – January 17, 2010) was an American author, screenwriter, and Classics Professor. He was best known for writing the phenomenally successful novel Love Story (1970), and the hit major motion picture of the same name. Photo by James R. Glenn

In My Father’s Footsteps

As his parents’ apartment building did not permit pets or children, my father spent the first six years of his life living with his grandparents at 800 St Marks Avenue, a neat neo-Georgian mansion In Brooklyn’s Bedford-Stuyvesant. For much of the time, he was sequestered in the nursery on the top floor and tended to by a shifting cast of starched and white-capped nannies. Down the hall, preserved in all its nineteenth-century splendour, was the ballroom, with high vaulted ceilings and a grand theatre stage at the far end. This was a home more suited to the lifestyle of an old East Coast family than to that of aspirant Polish immigrants, but it was a house his family were proud of, a clear sign that they had made it – that they were right to cross oceans and that America, for those who worked hard enough, was indeed a land of opportunity.

With an ailing grandmother trapped downstairs and an absent, driven grandfather running his fabric store in Manhattan, my father’s earliest memories are of performing on that stage to an invented crowd; filling a solitary world with companions from his imagination. He wrote plays and performed them, emoting to an echoing and empty theatre. Inventing people became a powerful defence against loneliness, and later an even more powerful tool for engaging the attention of real people. In those evenings at the top of the house he would wait anxiously for his mother’s visits and would continue the storytelling for her, spurred into creativity by his desperation to produce a cliffhanger that would entice her to come back again the next night. From the earliest years of his life, fiction served the dual purpose of creating a cast of characters he cared about, and making the cast of his own life care more about him. It is little wonder that at Harvard he was drawn to the fantasy and melodrama of the Greek and Roman myths, still less surprising that he became a writer. A little boy playing alone on an empty stage has a heightened drama of its own and those years of isolation led, in their way, to Love Story.

My father wrote Love Story in a white heat, when he was thirty-two years old. At the time he was a professor of classics at Yale University, on the verge of tenure and beloved by his students who would pile into the 600-seat Stirling Law auditorium to hear his lectures. At Harvard in 1958 he had written The Hasty Pudding Review with composer Joe Raposo and they had gone on to have some success with a musical, Sing, Muse!, which ran for thirty-nine performances off Broadway and won my father the attentions of an agent. Since then he’d had a successful secondary career writing musicals in New York and film scripts in Hollywood, work he relished as an escape from the suffocating atmosphere that he had always felt pervaded academia.

Love Story was the product of a Christmas break, inspired by a true story he’d heard that had captured his imagination. His agent begged him to put it aside, convinced it would ruin his reputation as a writer of macho action screenplays. But it had poured from him in what felt like a single sitting and, although he could not have known to what extent, he knew it was worth fighting for. Love Story altered everything. By the end of 1970, the combined success of the novel and the film had made him a household name – and face. He was a born performer and his publishers exploited his love of public speaking, honed at the lectern, by sending him on late-night talk shows again and again. He was their most powerful advertisement. When the film wasn’t doing as well as expected in Japan, for example, the solution was to ‘send Erich’ and sales skyrocketed. For better or for worse, he was brought out from behind his desk and turned into a celebrity to rival the stars of his movies and, almost overnight, he became a world-famous author.

My earliest memories of my father are inextricably linked with his identity as a writer. Our games all had language at their core-limericks and wordplay, reciting poetry, composing songs and recording interviews with one another for hours on his Dictaphone. My mother has boxes of tiny unlabelled tapes that summon these moments – aged two and a half, whenever I entered my father’s office, no matter what he had been doing when I arrived, he would raise a small black Dictaphone to my lips and ask, ‘Miss Segal. Any comments?’ He was a sage and focused interviewer, probing my thoughts on nursery school, on the weather, on my plans for the afternoon, on the well-being of my imaginary friend, Latty. I was striving to emulate my father long before I was old enough to write – Latty was a secretary whose predominant responsibility was to take my dictation. I knew nothing else. He was always in his office, always writing, and when he wasn’t in his office he was reading to me, and my sister, Miranda.

He chose our reading material from the canon, but dismissed squadrons of poets for being ‘boring’ – no one ever made me recite ‘On Westminster Bridge’. My bedtime stories were Robert Frost, Edgar Allan Poe, Ogden Nash, e e cummings. From cummings he taught me that children are apt to forget to remember; from Poe the word ‘tintinnabulation’ and the magical concept of onomatopoeia. From Nash he taught me that ever-useful adage that candy is dandy but liquor is almost always quicker. These recitations would make my mother laugh, as did the dirty limericks he taught me, relishing my glee at the rude words, but most of all relishing my engagement with rhyme and rhythm. Writing was the centre of our family, the language we spoke, and the love between my parents. Identical ring binders open on their knees, they were often together on the sofa, arguing about sentences, exchanging strings of synonyms as if they were endearments. My father the writer, my mother the editor – theirs are the only skills to which I’ve ever aspired.

Find out more about Francesca Segal at www.francescasegal.com