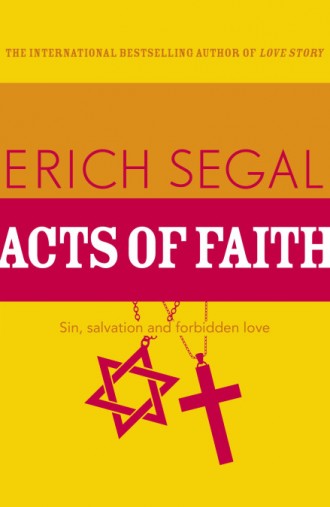 They met as children, innocents from two different worlds. And from that moment their lives were fated to be forever entwined.

Timothy: abandoned at birth, he finds a home and a dazzling career within the Catholic church. But the vows he takes cannot protect him from one soul-igniting passion.

Deborah: she was raised to be docile and dutiful – the perfect rabbi’s wife – but love will lead her to rebellion. And into worlds the patriarch would never dare imagine.

Reaching across more than a quarter of a century, from the tough streets of Brooklyn to ultramodern Brasilia to an Israeli kibbutz, this is an unforgettable story of three extraordinary lives . . . and one forbidden love.

Acts of Faith in Erich Segal’s own words:

I had the worst writer’s block in my life, which is why Acts of Faith took me four years. To go over, to trespass on the territory of your own memories is a scary thing. But night has fallen on the years that have passed. This book is my catharsis.”

Quotes from Acts of Faith

"I was baptized in blood. My own blood. This is not a Jewish custom. It is merely a fact of history.” "'Except a man be born again, he cannot see the kingdom of God.' Yes, Father' I do feel reborn."

"Be true to yourself and don't feel guilty"

Reviews of Acts of Faith

'A love story of cosmic proportions'